Iran Accused Of Skullduggery in Iraq 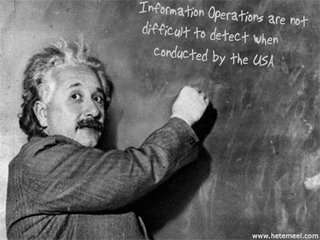 It's been a few days since we covered the anti-Iran information operation. Today brings a message from "Zal", as every jerkoff in Washington refers to U.S. ambassador to Iraq, Zalmay Khalilzad.

Iranian agents train and arm Shiite Muslim militias such as the Mahdi Army, linked to one of Iraq's most powerful clerics, Khalilzad said, and also work closely with Sunni Arab-led insurgent forces including Ansar al-Sunna, blamed for dozens of deadly attacks on Iraqi and American soldiers and Shiite civilians.

"Our judgment is that training and supplying, direct or indirect, takes place, and that there is also provision of financial resources to people, to militias, and that there is presence of people associated with Revolutionary Guard and with MOIS," the Afghan-born Khalilzad said, referring to Iran's main military force and its Ministry of Intelligence and Security.

The phrase "our judgment is" refers in U.S. intelligence community-speak to the consensus position expressed in a National Intelligence Estimate (NIE).

Someone authorized Khalilzad to allude to the classified NIE. In other words, this is being released for propaganda purposes.

Khalilzad expressed particular concern over Iran's ties to the Mahdi Army, an armed group loyal to the outspoken Shiite cleric Moqtada al-Sadr that the ambassador said was responsible for many of the recent killings, despite Sadr's public pleas for calm...

But Khalilzad said the United States has had no face-to-face contact with the cleric, in his early thirties, whose followers hold more than 30 seats in the new parliament. "No, I don't talk to him, because we don't meet with Moqtada Sadr, but I have sent him messages publicly. . . . We engage him whatever way we can," said Khalilzad, who added that he and other embassy officials did meet with Sadr's political allies. "I think that our people advise me against it because there is an indictment against him."

The denial of any contact between U.S. officials and Sadr is a questionable assertion at best.

An aide to Sadr, one of the most outspoken critics of the U.S. military presence in Iraq, said Thursday that the cleric would not meet with American officials until foreign troops are withdrawn from Iraq.

The previous statement is made in precisely the same spirit as George W. Bush's claims never to have met Jack Abramoff.

Khalilzad ends with a reasonable statement given the situation. Too bad it is untrue:

"I have been reduced -- and I am not complaining -- to an observer, which is a good thing," he said, dismissing the widely held belief that he is still the driving force for unity, cajoling rival groups to negotiate. "I think now I say that they are really politically moving toward a self-reliance."

The reader is well advised to take Khalilzad's "observer" status with a grain of salt.