A Chink In The Pretext Armour 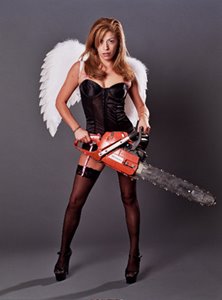 Chinese ambassador Wang Guangya on Friday said the Security Council should give "four weeks to six weeks" to comply with demands by the UN nuclear watchdog that it halt all uranium enrichment activities.

Meanwhile, The United States has termed it an attempt to "divert pressure" has drawn over its nuclear program.
Read More at PakTribune

Please tell us - what's the hurry? is far from going nasty-nuclear within 2 years let alone within 4 to 6 weeks. What's the ulterior intent of a deadline that finds a Chinese proposal for a 4 to 6 week extension on the window for Iranian compliance portrayed by the U.S. as the very epitome of reckless procrastination?

What in fact are the schedules and plans that would be devastatingly impacted upon by a 4 to 6 week hiccup in developments? By the way, what's the seasonally conditional window of opportunity for atmospheric conditions optimal to an aerial onslaught against ? Ain't we talkin' the same seasonal time slot as for our Q2-03 (Third Persian Gulf War) Shock & Awe putsch?

And if we wanna pound 'em from the skies before we commit troops not yet rotated out of other theaters then an extended aerial campaign over the summer and fall will soften Persian spirits enough for delusionally imagined mop-up troop insertions come Q4-06. Such insertions would coincide with doctrinal assertions of optimal climate conditions for ground forces operating in the region. (Hang on a sec...surgeons operate - the military kills.)

And then, lest we forget, our own pending elections and the scary although improbable prospect of accountabilitiy for the crazies at the hands of the liberal teat-sucking wusses should they overcome Diebold, post lactation anxiety, and the NSA to win back the delapidated house of redunant repute.

Could it indeed be this mix of seasonally and domestically determined deadlines for optimal aerial warfare parameters that the Chinese are dicking around with? Is that the subtextual subterfuge of their proposal? Does that Sino-subtext accurately reflect the existence of a foregone conclusion – ie the Q2-06 hit on ?

We think so. Ra Ra Ra

That's quite a picture!

Hey there Diggy
Yes, quite the disconcerting juxtaposition of extremes. She be a hot heavenly angel packing one helluva subtext.

Welcome to the meatball zone,
M1