Custer Battles The U.S. This Time 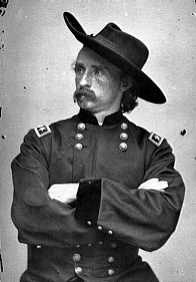 Admittedly the American government is an easier target than the Indians at Little Big Horn.

Two Army veterans and their company cheated the U.S. government on a contract to furnish Iraq with a new currency in 2003 and should pay more than $10 million in assorted damages, a federal jury in Alexandria ruled yesterday.

In the first civil fraud verdict arising from the war effort, the eight-member panel decided, after two days of deliberation, in favor of two former workers who claimed in a lawsuit that Custer Battles LLC created phony Cayman Island companies to overcharge the Coalition Provisional Authority that ran Iraq after the U.S.-led invasion in 2003.

"This is a smashing victory for U.S. taxpayers and these whistle-blowers though the Bush administration did nothing to help," said Alan M. Grayson, the attorney for the plaintiffs, Robert Isakson and William Baldwin. Under the federal False Claims Act, citizens can sue on behalf of the government and the Justice Department can then decide whether to join the suit, which it did not in the Custer Battles case.

The company, which had offices in Northern Virginia and Rhode Island, was founded in 2002 by Scott Custer, a former Army Ranger, and Michael Battles, a West Point graduate who also served in the CIA. The war in Iraq brought it meteoric growth, as it picked up CPA contracts to manage security at Baghdad International Airport and help distribute the country's new currency.

Someone pulling a stunt like the following would be greeted to extra-judicial punishment under my command:

During the trial, retired Brig. Gen. Hugh Tant III told jurors that Custer Battles's performance amounted to "probably the worst I've seen in my 30 years in the Army." Tant had been overseeing the firm's work on the currency conversion contract.

He testified that of the 36 trucks the firm supplied, 34 did not work. When he confronted Battles, he said Battles responded: "You asked for trucks and we complied with our contract and it is immaterial whether the trucks were operational."

...sue on behalf of the government AND!!! get a piece of the settlement/damages pie!. Now ain't that just amazing. Thanks F-Wit.

Kinda makes me want to take a creative new approach to the occasional malfeasance that I become aware of.

hey, nice! i found a place where you can get a FREE GAME SYSTEM!
I got mine and sold it though. Just put in your zipcode to see
if there are any places available in your area. I found one and I live in a
small town. here it is:

Hey! Very Nice! Check out this website I found where you can get a FREE
GAME SYSTEM. It's not available everywhere, so go to the site and put
in your zipcode to see if you can get it. I got mine and sold it!