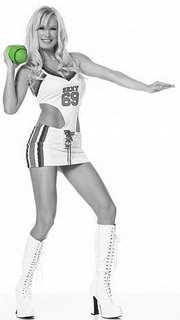 That Was Then:
The Swedish government's Foreign Minister Laila Freivalds deployed the security police to ban the extreme right wing Sverigedemokraterna's blog from publishing the cartoons by contacting their hosting ISP.

"“We think that this was the best decision after we were contacted by the Foreign Ministry and SÄPO,” Anna Larsson, vice president of hosting compant Levonline, told DN. Freivalds told DN that it is terrible that a small group of extremists are exposing Swedes to danger (by reprinting the cartoons)".” Säpo is Sweden's MI5.

The sacking comes amid accusations that Laila Freivalds lied about knowing one of her aides was involved in shutting down the website posting cartoons depicting the prophet Mohammed.

Such involvement by the government is a violation of constitutional guarantees of free speech.

The sacking should give reason for joy amongst the mirthful 5th column nazi fucks over at LGF. Imagine having something in common with those shit-kicking nazi lithpers for once - Neat-O!.